KIDS, don't forget to check with an adult before you visit other web sites, and do not share any information about yourself - including your full name, address and phone number - without your parent's permission.

You are now leaving jenga.com

JENGA®, Edge of
your Seat FUN!

Jenga is a game of physical and mental skill. Built on the simple premise of stacking blocks, Jenga engages players of all ages, across all cultures. Jenga's success rests on its solid play value. Players take turns to remove a block from a tower and balance it on top, creating a taller and increasingly unstable structure as the game progresses. 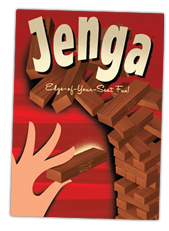 Leslie Scott, game designer and author, developed the original JENGA® Classic game from a wood block stacking game her family had created in Ghana in the 1970s. Introduced to the public at the famous Harrod's department store in London in 1982, JENGA® was launched in North America in 1986, and has since become an international game icon.

The record for the highest known JENGA® tower is 40 complete stories with two blocks into the 41st, claimed in 1985 by Robert Grebler (US). We are actively seeking a new world solo height champion. Become a fan and stay tuned to the Jenga Facebook page for further news. 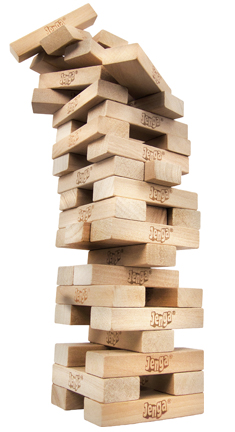 A classic Jenga game consists of 54 precision-crafted, specially finished hard wood blocks. To set up the game, use the included loading tray to create the initial tower. Stack all of the blocks in levels of three placed next to each other along their long sides and at a right angle to the previous level.

Once the tower is built, the person who stacked the tower plays first. Moving in the game Jenga consists of:

1) taking one block on a turn from any level of the tower (except the one below an incomplete top level), and

2) placing it on the topmost level in order to complete it.

Players may tap a block to find a loose one. Any blocks moved but not played should be replaced, unless doing so would make the tower fall. The turn ends when the next player touches the tower, or after ten seconds, whichever occurs first.

The game ends when the tower falls -- completely or if any block falls from the tower (other than the block a player moves on a turn).

The loser is the person who made the tower fall (i.e., whose turn it was when the tower fell).

Would you like to play the JENGA® game with blocks made of ice? Stones? Butter? These materials could be possible with a digital game. They were among the first mid-1990s concepts for a computer-based JENGA® game. In addition to changing block materials, the exciting possibilities also included environmental factors, and numerous play enhancements. Arctic cold or blast furnace hot environments, hurricanes or earthquakes impacting the tower were but a few.

There were several basic challenges that waited for successful resolution:

Positive answers to these questions waited for more than a decade.

Electronic Arts stepped up to tackle the challenge. In partnership with Hasbro, the world's leading game company and primary licensee of the JENGA® Brand game, EA's Family Game Night 2 grouping of games for the Nintendo Wii, including JENGA®, launched to great reviews in fall, 2009. JENGA, as part of Family Game Night, also was introduced for the X-Box Live Arcade in August, 2010.

With cell phones morphing into smart phones with ever-increasing power, the time was right for handheld mobile JENGA® play.

Jenga.com is listed by the kidSAFE Seal Program. The kidSAFE Seal Program is an independent safety certification service and seal-of-approval program designed exclusively for children-friendly websites and technologies, including kid-targeted game sites, educational services, virtual worlds, social networks, mobile apps, tablet devices, and other similar interactive services and technologies. Click on the seal or go to www.kidsafeseal.com for more information.

JENGA® is a registered trademark owned by Pokonobe Associates.